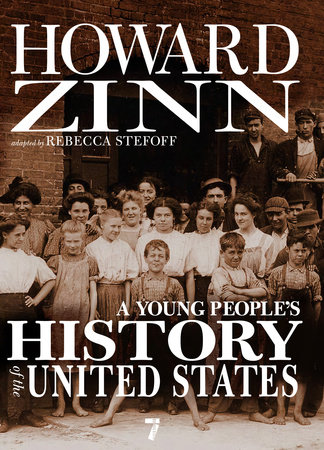 A YOUNG PEOPLE’S HISTORY OF THE UNITED STATES

Beginning with a look at Christopher Columbus’s arrival through the eyes of the Arawak Indians, then leading the reader through the struggles for workers’ rights, women’s rights, and civil rights during the nineteenth and twentieth centuries, and ending with the current protests against continued American imperialism, Zinn in the volumes of A Young People’s History of the United States presents a radical new way of understanding America’s history. In so doing, he reminds readers that America’s true greatness is shaped by our dissident voices, not our military generals.

“Zinn has written a brilliant and moving history of the American people from the point of view of those who have been exploited … the book is an excellent antidote to establishment history…While the book is precise enough to please specialists, it should satisfy any adult reader.”

“In many years of searching, we have not found one history book we would recommend to them—until [the] just published A Young People’s History of the United States. This is the edition of A People’s History that we have all been waiting for.”

“Zinn’s work exemplifies an approach to history that is radical, regardless of its subject or geographical location. He tells us the untold story, the story of the world’s poor, the world’s workers, the world’s homeless, the world’s oppressed, the people who don’t really qualify as real people in official histories. Howard Zinn painstakingly unearths the details that the powerful seek to airbrush away. He brings official secrets and forgotten histories out into the light, and in doing so, changes the official narrative that the powerful have constructed for us. He strips the grinning mask off the myth of the benign American Empire. To not read Howard Zinn is to do a disservice to yourself.”

“[Zinn] gives a real insight in to history that is often left out of text books. Highly recommended.”