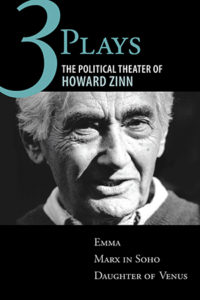 The only edition of world-renowned historian Howard Zinn’s three plays, an essential book for fans of Zinn or anyone interested in political theater.

World-renowned historian Howard Zinn has turned to drama to explore the legacy of Karl Marx and Emma Goldman and to delve into the intricacies of political and social conscience perhaps more deeply than traditional history permits. Three Plays brings together all this work, including the previously unpublished Daughter of Venus, along with a new introductory essay on political theater, and prefaces to each of the plays.

“The first act of Emma, Howard Zinn’s play about Emma Goldman, is a small miracle. Here is a drama that holds down the heroics, polemics and didacticism to which works about heroes and heroines are prone. True, Emma is idealized; she is loving, honest, selfless, daring, but she is also human and believable.”

“[Marx in Soho is] an imaginative critique of our society’s hypocrisies and injustices, and an entertaining, vivid portrait of Karl Marx as a voice of humanitarian justice—which is perhaps the best way to remember him.”

“[Daughter of Venus’s] central concerns—personal and social ethics; the balance of obligations to ourselves, our families, and our fellow citizens; the uses and abuses of political and scientific power—remain as timely as ever. . . . Zinn not only displays a fluid and passionately committed style but also is attempting to do something interesting with it: to interweave a story of familial tensions and national politics, and in doing so to remind us that the way we live our lives on the small, local, day-to-day scale of family life can have repercussions and implications for the life of the nation at large.”