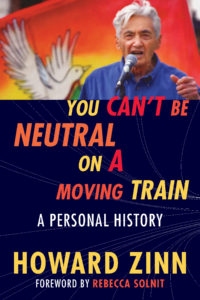 Second edition, with a new preface

A new edition of the classic memoir by one of our most lively, influential, and engaged teachers and activists. Howard Zinn, author of A People’s History of the United States, tells his personal stories about more than thirty years of fighting for social change, from teaching during the civil rights movement at Spelman College to protests against the war in Iraq.

A former bombardier in WWII, Zinn emerged in the civil rights movement as a powerful voice for justice, and for hope.

“An inspiring autobiography…in the tradition of Martin Luther King’s Letter from a Birmingham Jail.”

“A history and a history maker to give us hope.”

“A powerful, politically electric book from one of the most engaging social critics in the nation.:

“A personal favorite. This autobiography by the great activist and historian…provides an eloquent, personal account of the struggles for civil rights and against the Vietnam War, and a universal paean to protest and resistance.”

“Zinn explains his involvement in the struggle for civil rights, against war, and in support of organized labor by citing his ‘abhorrence of any kind of bullying.’ These are lively tales.”

“Pick up this book! Start reading it! I guarantee you won’t stop. The most influential teacher I’ve ever had continues to teach us about life and humanity and hope.”

“A teacher who committed his politically engaged life to the belief that love is a command to action.”