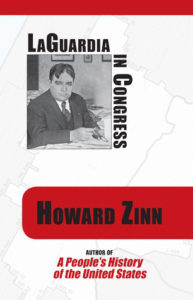 Fiorello LaGuardia is known best as the tempestuous mayor of New York City in the days when Franklin Delano Roosevelt sat in the White House. There had been, however, an earlier time, which matched his mayoralty years in sheer drama and perhaps surpassed them in lasting achievement—LaGuardia’s years in Congress.

He served in the House of Representative almost continuously from 1917 to 1933, representing two ethnically diverse congressional districts: the Fourteenth (Greenwich Village), from 1917 to 1919, and the Twentieth (East Harlem), from 1923 to 1933. Although barred from important committee posts because of his political independence and thus denied from playing a direct role in lawmaking, he was a tireless and vocal champion of Progressive causes, from allowing more immigration and removing U.S. troops from Nicaragua to speaking up for the rights and livelihoods of striking miners, impoverished farmers, oppressed minorities, and struggling families. A goad to the era’s plutocrats and their enablers in government, LaGuardia fought for progressive income taxes, greater government oversight of Wall Street, and national employment insurance for workers idled by the Great Depression.

In this book, first published by Cornell University Press in 1959, Howard Zinn establishes LaGuardia’s tenure in Congress as a vital link between the Progressive and New Deal eras, offering a lively and informative account of his many legislative battles, his political philosophy, and the distinctly urban (specifically, New York City) sensibilities he brought to the Progressive movement.

“Howard Zinn’s LaGuardia in Congress is an exceedingly well-written and highly readable study of a man and his times. It describes the career of an extraordinary human being whose background and ideology presaged the New Deal and whose specific legislative program foreshadowed and even went beyond it…. The volume is well documented. Zinn has drawn heavily from the personal papers of LaGuardia and his contemporaries, as well as from the interpretive studies of the period.”

“An admirable book, lively, objective, and nostalgic…. LaGuardia kept the flame of reform at least sputtering through years when the popular opinion supposed everything to be perfect. Howard Zinn wisely reminds us not to think of LaGuardia as having been an ‘important figure’ in these years; yet his energy was so fierce and many of the incidents of his political battles so picturesque that one could easily exaggerate the place he held on the national scene. In fact, he was almost invariably on the side of defeat. He was fighting against massive powers and, even more chillingly, against apathy and complacency.”