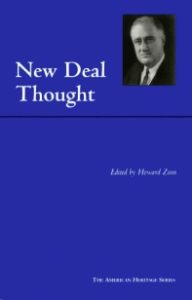 Edited and with an introduction by Howard Zinn

This anthology assembles the contemporary writings not only of the New Dealers—the men who devised and executed the programs of the government in the era of Franklin D. Roosevelt—but also of the “social critics” who “gathered in various stances and at various distances around the Roosevelt fires.” Here is a sampling of the famous movers and shakers of the 1930s: Thurman Arnold, Henry Wallace, Rexford Tugwell, David Lilienthal, Harry Hopkins, Harold Ickes, Frances Perkins, John Maynard Keynes, and of course Roosevelt himself.

In his introduction, Howard Zinn defines the boundaries of the New Deal’s experimentalism and attempts to explain why it sputtered out. The result is a book that captures the spirit of the New Deal—hopeful, pragmatic, humane—yet remains hardheaded about its accomplishments and failures.

“They’re all here, all the famous names of the New Deal, in an ambitious compendium of major articles and speeches…. Considerable effort appears to have been made to unearth thoughtful speeches and articles from some hard-to-find locations, with only a few items culled from public documents and none from the mass media publications, all of which is commendable.”

“The volume … remains a valuable resource.”