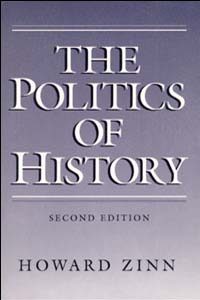 THE POLITICS OF HISTORY

This paperback bestseller presents a series of case studies and thought-provoking essays arguing for a radical approach to history and providing a revisionist interpretation of the historian’s role. In a new introduction written for this edition, Howard Zinn responds to critics of the 1970 edition and comments further on the radicalization of history.

“The meaning of the sixties in intellectual, political and cultural life is very much debated today…. If you want to know how the civil rights movement and the peace movement affected the writing of American history, and indeed the history of the profession itself, Zinn’s collection is still the best thing to read.”

“At least for appearance’s sake traditional historians have worn that balanced judgment they can ‘no more discard than their pants.’ Lodging a sharp critique of these erect professionals with humor and grace, Zinn shows that they clothe themselves in this spurious neutrality and in comparable bamboozlements—disinterested scholarship, objective study, dispassionate learning, among them; to cover the simple truth that history is contested terrain in which they are not innocent bystanders. A powerful debamboozler, The Politics of History is a no less powerful call to us all to remember ‘forgotten visions, lost utopias, unfulfilled dreams.’”

“Reissuing The Politics of History is a splendid idea. The issues Zinn deals with are as relevant today as when the book was first published.”