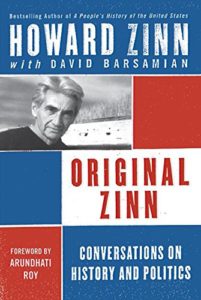 Historian, activist, and bestselling author Howard Zinn has been interviewed by David Barsamian for public radio numerous times over the past decade. Original Zinn is a collection of their conversations, showcasing the acclaimed author of A People’s History of the United States at his most engaging and provocative.

Touching on such diverse topics as the American war machine, civil disobedience, the importance of memory and remembering history, and the role of artists—from Langston Hughes to Dalton Trumbo to Bob Dylan—in relation to social change, Original Zinn is Zinn at his irrepressible best, the acute perception of a scholar whose impressive knowledge and probing intellect make history immediate and relevant for us all.

“Not to read Howard Zinn is to do a disservice to yourself.”

“A history maker to give us hope.”

“It has been Zinn’s lifework to illuminate the subjectivities others have ignored.”

Arundhati Roy studied architecture in New Delhi, where she now lives. She is the author of the novel The God of Small Things, for which she received the 1997 Booker Prize. The novel has been translated into more than forty languages worldwide. She has written several non-fiction books, including Field Notes on Democracy: Listening to Grasshoppers, Capitalism: A Ghost Story, Things That Can and Cannot Be Said (with John Cusack), and The End of Imagination, all published by Haymarket Books. She is the recipient of the 2002 Lannan Cultural Freedom Prize.

OTHER TITLES BY HOWARD ZINN