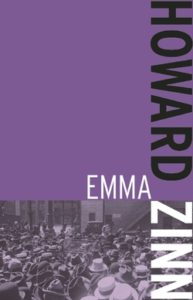 Howard Zinn dramatizes the life of Emma Goldman, the anarchist, feminist, and free-spirited thinker who was exiled from the United States because of her outspoken views, including her opposition to World War I.

With his wit and unique ability to illuminate history from below, Zinn reveals the life of this remarkable woman. As Zinn writes in his introduction, Emma Goldman “seemed to be tireless as she traveled the country, lecturing to large audiences everywhere.”

“Howard Zinn’s play about Emma Goldman is a small miracle. Here is a drama that holds down the heroics, polemics and didacticism to which works about heroes and heroines are prone. True, Emma is idealized; she is loving, honest, selfless, daring, but she is also human and believable.”