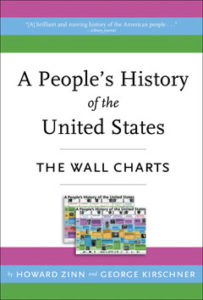 A PEOPLE’S HISTORY OF THE UNITED STATES
The Wall Charts

Few works of American history have done more to change the way in which recent generations have looked at their past than Howard Zinn’s A People’s History of the United States. With millions of copies sold, Zinn’s social history fleshes out the bare skeleton of traditional historical texts with the stories of working men and women throughout this country’s history.

A People’s History of the United States: The Wall Charts is a set of two posters and an explanatory booklet designed to bring the contents of the original People’s History to an even broader audience. Illustrated in full color, they portray over five hundred years of American social and cultural history. Organized thematically as well as chronologically, they allow the reader to trace the developments of specific topics—from slavery and resistance to the role of women—through images and quotations that go well beyond the wars and presidencies of traditional American history.

A People’s History of the United States: The Wall Charts creates a unique tool for learning about American history from the celebrated book that turned history on its head.