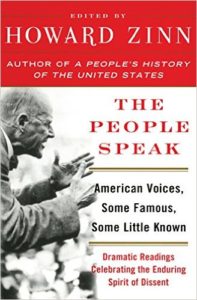 THE PEOPLE SPEAK
American Voices, Some Famous, Some Little Known

From that celebration, this book was born. Collected here under one cover is a brief history of America told through dramatic readings applauding the enduring spirit of dissent.

Here in their own words, and interwoven with commentary by Zinn, are Columbus on the Arawaks; Plough Jogger, an anonymous farmer and participant in Shays’ Rebellion; Harriet Hanson, a Lowell mill worker; abolitionist Frederick Douglass; Mark Twain; Mother Jones; Emma Goldman; Helen Keller; Eugene V. Debs; Langston Hughes; Genora Johnson Dollinger on a sit-down strike at General Motors in Flint, Michigan; an interrogation from a 1953 HUAC hearing; Fannie Lou Hamer, a sharecropper and member of the Mississippi Freedom Democratic Party; Malcolm X; and James Lawrence Harrington, a Gulf War resister, among others