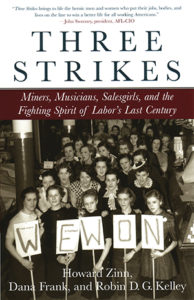 Three renowned historians present stirring tales of labor: Howard Zinn tells the grim tale of the Ludlow Massacre, a drama of beleaguered immigrant workers, Mother Jones, and the politics of corporate power in the age of the robber barons. Dana Frank brings to light the little-known story of a successful sit-in conducted by the ‘counter girls’ at the Detroit Woolworth’s during the Great Depression. Robin D. G. Kelley’s story of a movie theater musicians’ strike in New York asks what defines work in times of changing technology.

“Three Strikes brings to life the heroic men and women who put their jobs, bodies, and lives on the line to win a better life for all working Americans. Zinn, Frank, and Kelley show us that while the country and the union movement have changed greatly in the last hundred years, our struggle to close the divide between rich and poor remains the same.”

“Provocative analysis of still relevant issues, as the passionate, sometimes violent demonstrations at international meetings of the global economy demonstrate.”