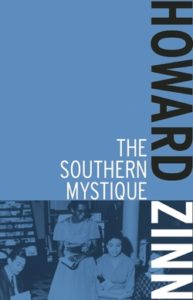 The South has long been surrounded in mystique. In this powerful volume, first published in 1967, Zinn draws on his own experiences teaching in the South and working within the Southern civil rights movement to challenge stereotypes surrounding the South, race relations, and how change happens in history. With a new introduction from the author.

“[It’s] a particular joy … to read Howard Zinn’s calm, conscientious account of his experiences as a white teacher at Spelman College in the Deep South, experiences in which the nature of prejudice is viewed with understanding, perspicacity and … a not too guarded optimism…. [T]he book’s real strength lies in its many examples of cultural maladjustment toward political, economic and religious disparities. There is, for instance, a telling chapter on the much-publicized jailings of King and his followers in Albany, Georgia, for which Zinn blames Washington irresolution, rather than local ‘evil.’ Zinn’s temperature reading of the sick South shows up the sickness—a sleeping one, as it were—of the Republic. Thus his optimism is contingent upon our awakening to action and to health.”

“[A] book that, in its analysis of the South as quintessentially American, helped stimulate the ongoing debate over whether the region is different from and at odds with the rest of the country.”

“It is recommended reading for all who assume that there are palpable distinctions which set the South apart from the rest of the United States.”

The Journal of Southern History

“The strongest argument yet assembled for civil rights laws as a wedge for ultimate integration…. This is a mentally bracing view…. The view of the new radicals, which Zinn so eloquently presents, reminds us that change and openness are synonymous with life.”