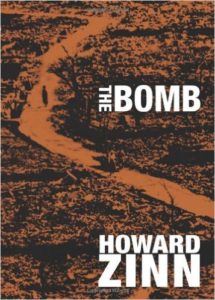 As an active WWII bombardier returning from the end of the war in Europe and preparing for combat in Japan, Howard Zinn read the headline “Atomic Bomb Dropped on Japan” and was glad—the war would be over. “Like other Americans,” writes Zinn, “I had no idea what was going on at the higher levels, and had no idea what that ‘atomic bomb’ had done to men, women, children in Hiroshima, any more than I ever really understood what the bombs I dropped on European cities were doing to human flesh and blood.” During the war, Zinn had taken part in the aerial bombing of Royan, France, and in 1966, he went to Hiroshima, where he was invited to a “house of rest” where survivors of the bombing gathered. In this short and powerful book on the backstory of the making and use of the bomb, Zinn also offers his deep personal reflections of these events, and the profound influence they had in transforming him from an order-taking combat soldier to one of our greatest anti-authoritarian, antiwar historians.

Simultaneous publication in the U.S. and Japan commemorated the 65th anniversary of the United States’s two atomic bombings of Japan by calling for the abolition of all nuclear weapons and an end to war as an acceptable solution to human conflict.

“He wrote the book to remind himself and to remind us that anybody can throw the wrench in the machinery, and we often should.”

“Part history, part memoir, part sermon, The Bomb is meant to wake up citizens, to rouse them to reject ‘the abstractions of duty and obedience’ and to refuse to heed the call of war.”

“Zinn, the people’s historian, leaves us with words that bring together thought, action, and passion. His experience during World War II left him unpersuaded by the arguments of military necessity and the appeals to nationalism. We must refuse ‘to be transfixed by the actions of other people, the truths of other times,’ he writes in The Bomb. This ‘means acting on what we feel and think, here, now, for human flesh and sense, against the abstractions of duty and obedience.’”

“Occasioned by the 65th anniversary of the Hiroshima and Nagasaki bombings, Zinn’s final work (completed just before his death in January 2010), combines a discussion of the horrors of atomic warfare with a glimpse at the carnage in Royan, which included the deaths of over 1,000 civilians in one of the first uses of napalm. . . . Zinn’s call to reject disproportionate violence in war remains unalloyed and relevant to today’s conflicts.”

“Thoughtful and full of stories of an old soldier who regrets what he has done, The Bomb is a fine posthumous release that shares much of the lost wisdom of World War II.”

“[Zinn] may be gone, but through his powerful and passionate body of work— of which The Bomb is an excellent introduction—thousands of others will be educated and inspired to work for a more humane and peaceful world.”

“The path that Howard Zinn walked—from bombardier to activist—gives hope that each of us can move from clinical detachment to ardent commitment, from violence to nonviolence.”

“Zinn’s last book is a modest appeal to humanity: War is miserable, and we have to stop it.”

Micah Uetricht, In These Times

“The late Howard Zinn’s new book The Bomb is a brilliant little dissection of some of the central myths of our militarized society.”