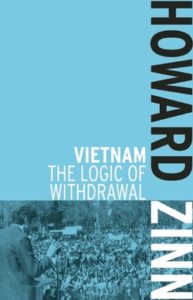 VIETNAM
The Logic of Withdrawal

Of the many books that challenged the Vietnam War, Howard Zinn’s trenchant argument from 1967 stands out as one of the best—and most influential. At the height of the Vietnam War, it helped sparked a national debate and gave urgent voice to the growing antiwar movement. This edition includes a new introduction from the author.

“Howard Zinn has had the courage to carry the general argument against further American involvement in the war in Vietnam to its logical conclusion. His is the best statement of the case for American withdrawal that has appeared to date. Until the case for withdrawal had been stated with the clarity and conviction that Zinn has brought to it, the debate about Vietnam was necessarily limited; in other words, it has tended to be a debate within certain unstated but clearly understood limitations. Mr. Zinn has also dispelled the fog of words, the shameless double-talk, and the myths that have beclouded American understanding of the issues, the alternatives and the real meaning of the war in Vietnam. An invaluable contribution to the dialogue on the subject.”

Carey McWilliams, editor of The Nation