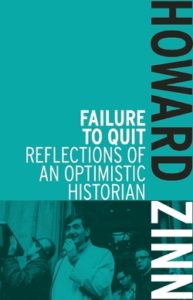 FAILURE TO QUIT
Reflections of an Optimistic Historian

In this lively and accessible collection of essays, Zinn discusses a wide range of historical and political topics, from the role of the Supreme Court in U.S. history to the nature of higher education today. With equal parts humor and force, Zinn argues that propaganda can be exposed and authority challenged, and that the struggle for justice can lead to important breakthroughs in the fight to create a better society.