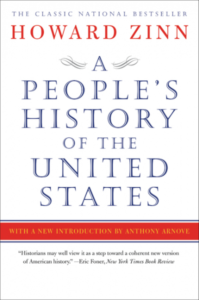 A PEOPLE’S HISTORY OF THE UNITED STATES
1492–Present

With a new introduction by Anthony Arnove, this updated edition of the classic national bestseller reviews the book’s thirty-five-year history and demonstrates once again why it is a significant contribution to a complete and balanced understanding of American history.

Since its original landmark publication in 1980, A People’s History of the United States has been chronicling American history from the bottom up, throwing out the official version of history taught in schools—with its emphasis on great men in high places—to focus on the street, the home, and the workplace.

Known for its lively, clear prose as well as its scholarly research, A People’s History of the United States is the only volume to tell America’s story from the point of view of—and in the words of—America’s women, factory workers, African Americans, Native Americans, the working poor, and immigrant laborers. As historian Howard Zinn shows, many of our country’s greatest battles—the fights for a fair wage, an eight-hour workday, child-labor laws, health and safety standards, universal suffrage, women’s rights, racial equality—were carried out at the grassroots level, against bloody resistance.

Covering Christopher Columbus’s arrival through the September 11, 2001 attacks, A People’s History of the United States, which was nominated for the American Book Award in 1981, features insightful analysis of the most important events in our history.

“A brilliant and moving history of the American people.”

“Howard Zinn’s work literally changed the conscience of a generation. And the series of ‘people’s histories’ derived from this great work have provided new understanding of who we are and what we should aspire to be. As the thirty-fifth anniversary edition reminds us, this is a remarkable legacy.”

“[Howard Zinn] wrote to the people, for the people: ‘My intention is … to light a flame under the rest of us.’ And that is exactly what Howard Zinn did—in the dozens of books he wrote and edited, in the hundreds of speeches he gave in his teachings and activism, and, later in life, in his role as the muse of history and politics for a new generation of freethinkers and organizers.”

“Few historians manage to reach a broad nonacademic audience…. Zinn’s public learned about ordinary Americans’ struggles for justice, equality, and power. I have long been struck by how many excellent students of history first had their passion for the past sparked by reading Howard Zinn.”