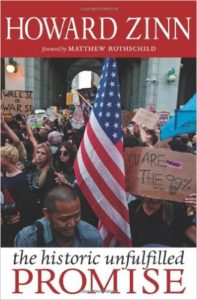 Howard Zinn’s views on social movements, freedom, history, democracy, and our own human potential are educational and transformative. In few places is his voice more clear and accessible than in the dozens of articles he penned for The Progressive magazine from 1980 to 2009, offered together here in book form for the first time.

Whether encouraging people to organize, critiquing the government, or speaking on behalf of working people who struggle to survive in an economy rigged to benefit the rich and powerful, Zinn’s historical clarity, unflappable optimism, and unshakable questions reverberate throughout The Historic Unfulfilled Promise: “Have our political leaders gone mad?” “What kind of country do we want to live in?” “Has the will of the people been followed?”

The Historic Unfulfilled Promise is a genuine work of conscience, rich in ideas, charged with energy; an invaluable introduction for the uninitiated and a must-have for Zinn’s fans.

“This posthumous collection of Zinn’s passionate, iconoclastic, and wryly humorous articles from the Progressive magazine spans 30 years… Zinn argues repeatedly for an alternative to war, totalitarianism, and redistribution of resources and energy away from the military and ‘toward ideals of egalitarianism, community, and self-determination… which have been the historic, unfulfilled promise of the word democracy.’ Zinn persists with his optimism and sometimes proves astounding in his almost clairvoyant analysis, as the essays progress from Boston University student and faculty protests against the Vietnam War and the academic “Establishment” through the two Iraq wars, to Obama’s expansion of the war in Afghanistan. In addition, Zinn writes of his own youth and radicalization, and his admiration for artists who “wage the battle of justice in a sphere which is unreachable by the dullness of ordinary political discourse,” including a warm and perceptive memorial to Kurt Vonnegut, with whom he became friends late in life, and with whom he shared a conversion to pacifism after serving in WWII. His call to action will strike a chord with a younger generation of occupiers.”

“A sharp and insightful collection from one of the country’s most visible historians and critics.”

“Howard Zinn was called a lot of different names: anarchist, socialist, and communist. He called himself a lot of different names, too: anarchist, socialist, and communist. No one ever seems to have called him Zen, but maybe it’s time to start… The Historic Unfulfilled Promise is a testament to Zinn’s Zen politics: his refusal to be silent, to acquiesce, or to sever his ties with the downtrodden.”