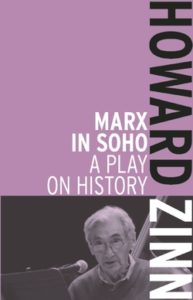 MARX IN SOHO
A Play on History

The premise of this witty and insightful “play on history” is that Karl Marx has agitated with the authorities of the afterlife for a chance to clear his name. Through a bureaucratic error, though, Marx is sent to Soho in New York, rather than his old stomping ground in London, to make his case.

“An imaginative critique of our society’s hypocrisies and injustices, and an entertaining, vivid portrait of Karl Marx as a voice of humanitarian justice—which is perhaps the best way to remember him.”

“A cleverly imagined call to reconsider socialist theory… Zinn’s point is well made; his passion for history melds with his political vigor to make this a memorable effort and a lucid primer for readers desiring a succinct, dramatized review of Marxism.”

“Even in heaven it seems, Karl Marx is a troublemaker. But in the deft and loving hands of activist/author/historian Howard Zinn, the historical figure… is also a father, a husband and a futurist possessing a grand sense of humor.”

“A witty delight that will engage both new and old acquaintances of the Marxian corpus…. Even conservatives will find Zinn’s [book]… an intelligent and diverting read. Recommended for academic and public libraries alike.”