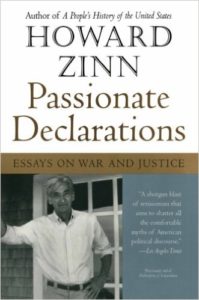 Revised edition with a new introduction

From the bestselling author of A People’s History of the United States comes this selection of passionate, honest, and piercing essays looking at American political ideology.

Howard Zinn brings to Passionate Declarations the same astringent style and provocative point of view that led more than two million people to buy his book A People’s History of the United States. He directs his critique here to what he calls “American orthodoxies”—that set of beliefs guardians of our culture consider sacrosanct: justifications for war, cynicism about human nature and violence, pride in our economic system, certainty of our freedom of speech, romanticization of representative government, confidence in our system of justice. Those orthodoxies, he believes, have a chilling effect on our capacity to think independently and to become active citizens in the long struggle for peace and justice.

“A shotgun blast of revisionism that aims to shatter all the comfortable myths of American political discourse.”

“It has been Zinn’s life’s work to illuminate the subjectivities others have ignored…. It joins his pioneering … People’s History of the United States to form what could be called the essential Zinn.”