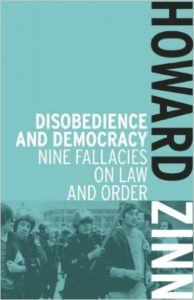 DISOBEDIENCE AND DEMOCRACY
Nine Fallacies of Law and Order

In this slim volume, first released in 1968, Zinn lays out a clear and dynamic case for civil disobedience and protest, and challenges the dominant arguments against forms of protest that challenge the status quo. Zinn explores the politics of direct action, nonviolent civil disobedience, and strikes, and draws lessons for today.