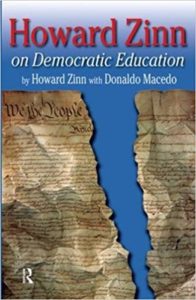 Perhaps no other historian has had a more profound and revolutionary impact on American education than Howard Zinn. This is the first book devoted to his views on education and its role in a democratic society. Howard Zinn on Democratic Education describes what is missing from school textbooks and in classrooms—and how we move beyond these deficiencies to improve student education.

This book seeks to redefine national goals at a time when public debates over education have never been more polarized—nor higher in public visibility and contentious debate. Zinn’s essays on education, many never before published, are framed in this book by a dialogue between Zinn and Donaldo Macedo, a distinguished critic of literacy and schooling, whose books with Paulo Freire, Noam Chomsky, and other authors have received international acclaim.

“This is a well-written and dynamic book to read, and a sociological treasure within the field of education. The authors explore both education and society within the context of democracy in a scholarly and meaningful way. The authors challenge us to re-define American culture and test our courage to develop a more equitable democracy.”

“Howard Zinn on Democratic Education is an excellent display of an author’s uncompromising commitment to democracy and education, especially in the face of repression. Zinn’s courage in confronting America’s historical and contemporary ills compels us to deliver the same sense of justice to our students and our country.”

Macedo has been a central figure in the field of critical pedagogy for more than 20 years. His work with Paulo Freire broke new theoretical ground, as it helped to develop a critical understanding of the ways in which language, power, and culture contribute to the positioning and formation of human experience and learning. Macedo was Freire’s chief translator and English language interpreter. His published dialogues with Paulo Freire are considered classic works not only for their elucidation of Freire’s theories of literacy but also for adding a more critical and theoretically advanced dimension to the study of literacy and critical pedagogy. Macedo’s and Freire’s coauthored book, Literacy: Reading the World and the Word, is central to critical literacy in that it redefines the very nature and terrain of literacy and critical pedagogy. Professor Macedo has published more than one hundred articles, books, and book chapters in the areas of linguistics, critical literacy, and multicultural education. His publications have been translated into several languages.