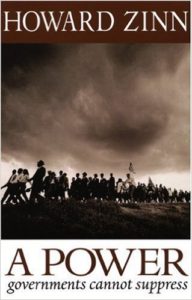 A Power Governments Cannot Suppress is a major collection of essays on American history, race, class, justice, and ordinary people who stand up to power. Zinn approaches the telling of U.S. history from an active, engaged point of view, drawing upon untold histories to comment on the most controversial issues facing us today: government dishonesty, terrorism, the wars on Iraq and Afghanistan, the loss of our liberties, immigration, and the responsibility of the citizen to confront power for the common good. A Power Governments Cannot Suppress is an invaluable post-9/11 era addition to the themes that run through Howard Zinn’s bestselling classic, A People’s History of the United States.

“Find here the voice of the well-educated and honorable and capable and humane United States of America, which might have existed if only absolute power had not corrupted its third-rate leaders so absolutely.”

“I love Howard Zinn. This collection of essays is a great book for anybody who wants to be better informed about history, regardless of their political point of view. I think Zinn is one of the most responsible, lively, and brave commentators on U.S. history now living. He’s constantly sounding the wake-up call, and we owe it to ourselves and our children to listen.”

“Thank you, Howard Zinn. Thank you for telling us what none of our leaders are willing to: The truth. And you tell it with such brilliance, such humanity. It is a personal honor to be able to say I am a better citizen because of you.”

“This strong, incisive book by Howard Zinn provides us with a penetrating critique of current U.S. policies and embraces the sweep of history…A Power Governments Cannot Suppress leaves us with the faith that citizens have what it takes to confront power and to reverse the dangerous and unjust acts of our government.”

Jonathan Kozol, author of The Shame of the Nation: The Restoration of Apartheid Schooling in America

“Howard Zinn is a unique voice of sanity, clarity, and wisdom who reads history not only to understand the present but to shape the future…A Power Governments Cannot Suppress should be read by every American, over and over again.”

“Zinn collects here almost three dozen brief, passionate essays that follow in the tradition of his landmark work, A People’s History of the United States…Readers seeking to break out of their ideological comfort zones will find much to ponder here.”

“This brilliant new book—like Howard Zinn’s presence, and his whole life, is the best possible antidote to political despair. Read it, and rejoin the struggle for a human world and a foreign policy that’s good for children.”

“Zinn’s work exemplifies an approach to history that is radical, regardless of its subject or geographical location. He tells us the untold story, the story of the world’s poor, the world’s workers, the world’s homeless, the world’s oppressed, the people who don’t really qualify as real people in official histories. Howard Zinn painstakingly unearths the details that the powerful seek to airbrush away. He brings official secrets and forgotten histories into the light and, in doing so, changes the official narrative that the powerful have constructed for us.”