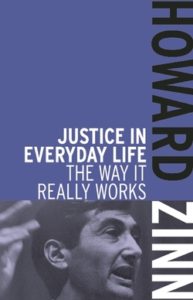 JUSTICE IN EVERYDAY LIFE
The Way It Really Works

Edited and introduced by Howard Zinn

Through this collection of voices, first published in 1977, Zinn explores ordinary people facing “justice” in the United States, in contrast to national myths of all Americans’ equal rights under the law. With sections on the police, the courts, prisons, housing, work, health, schools, and popular struggle, Justice in Everyday Life features classic essays by a diverse group of authors, including Jonathan Kozol.