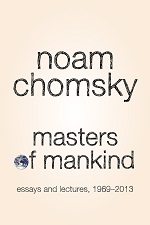 In this collection of essays from 1969-2013, Noam Chomsky exposes the real nature of state power. With unrelenting logic, he holds the arguments of empire up to critical examination and shatters the myths of those who protect the power and privilege of the few against the interests and needs to the many.

Including essays on subjects such as:

* Human Intelligence and the Environment
* Terror, Justice and Self-Defense
* The Welfare-Warfare state

This is an indispensable compilation of searing insights into the state of our world.

“Considering that Chomsky’s relevance has only grown with time, and that his positions prove less radical and more prescient as years pass, the timing of his new book release, The Masters of Mankind, a retrospective of lectures and essays stretching from 1969 to 2013, is perfect… There is more than enough profound, powerful material in this collection to impress any readers unfamiliar with Chomsky’s intellectual agility.”

“Chomsky is a global phenomenon . . . perhaps the most widely read voice on foreign policy on the planet.”

Marcus Raskin is the co-founder of the politically progressive Institute of Policy Studies (IPS), and he teaches social movements, national security and the philosophy of public policy at the Stephen J. Trachtenberg School of Public Policy and Public Administration at the George Washington University in Washington, DC.