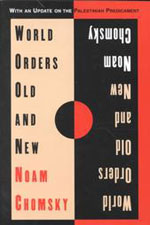 In this widely acclaimed study of global politics, Chomsky offers a devastating critique of conventional definitions of the “new world order.” It is, he argues, nothing more than an ingenious piece of “historical engineering,” whereby the pretexts for the Cold War — nuclear threat, Eastern Bloc menace — have been deftly replaced by a new set of convenient justifications for a Western agenda that remains largely unchanged. Includes an updated and extensive epilogue on the Middle East, World Orders Old And New is as relevant now as when it was first published.

“The most we can hope for I suppose is that every reporter might one day carry World Orders, Old and New around in his back pocket.”

“Chomsky’s work is neither theoretical, nor ideological: it is passionate and righteous. It has some of the qualities of Revelations, the Old Testament prophets and Blake.”

“For those who pursue justice and have an interest in the future of the planet World Orders, Old and New is compulsory reading.”

“For nearly thirty years now, Noam Chomsky has parsed the main proposition of American power — what they do is aggression, what we do upholds freedom — with encyclopedic attention to detail and an unflagging sense of outrage. World Orders Old and New may be his best book; it’s certainly his most concise and far-ranging.”

“With his customary mastery of the historical record and his command of enormous amounts of source material, Chomsky here debunks the notion that the ‘new world order’ of Bush and Clinton is different in any essentials from the old world order. . . . Impressive.”

“To Chomsky, the Cold War was just a passing phase in the West’s 500-year global domination of poorer nations, providing the U.S. with easy formulas to justify criminal interventionist actions abroad and entrenchment of privilege and state power at home. Marshaling meticulous scholarship, this leading critic of American foreign policy cogently argues that Washington’s support-open and covert-for repressive regimes in Colombia, Guatemala, Indonesia, Angola and elsewhere has undermined attempts to create meaningful democracy, thus exacerbating poverty and misery. Chomsky, a Massachusetts Institute of Technology linguistics professor, describes NAFTA as a protectionist pact, mislabeled ‘free trade’, which is likely to drive millions of Mexicans out of work while enriching U.S. agribusiness. He sets the Israeli-Arab conflict in the broad context of America’s postwar domination of the Middle East along lines established by British imperialism, with family dictatorships taking orders from Washington and protected by ‘regional enforcers’, preferably non-Arab (Turkey, Israel, Iran under the Shah, Pakistan). His devastating critique of the ‘new world order’ foresees a growing abyss between rich and poor-both internationally and at home.”