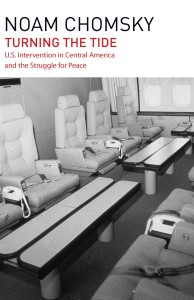 TURNING THE TIDE
U.S. Intervention in Central America and the Struggle for Peace

Noam Chomsky explores relations throughout Central America and relates these to superpower conflicts and the overall impact of the Cold War.

The United States has supported reaction throughout the region through a combination of economic pressure, CIA intervention, and proxy military activity. Turning the Tide succinctly and powerfully addresses three interrelated questions: What is the aim and impact of US Central American policy? What factors in US society support and oppose current policy? And, how can concerned citizens affect future policy?

A particularly revealing focus of Chomsky’s argument is the world of US academia and media, which he analyzes in detail to explain why the US public was so misinformed about its government’s policies.

“This book contains liberatory knowledge… There is an incredible amount of new research and understanding to be gained from reading these important chapters.”