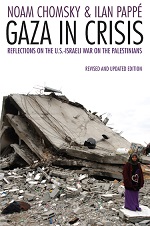 By Noam Chomsky and Ilan Pappé

Israel’s Operation Cast Lead was described by a UN fact finding mission (aka “the Goldstone report”) as “a deliberately disproportionate attack designed to punish, humiliate and terrorize a civilian population.” The winter 2008-09 assault claimed the lives of 1,400 Palestinians and thrust the crisis in Gaza into the center of the debate about the Israel/Palestine conflict.

The crippling siege continues to block access to construction materials desperately needed to rebuild in the wake of the Israeli attack and prevents people from leaving the Strip even for life threatening illnesses. With the constant humiliation of living a life punctuated by regular military incursions and ubiquitous checkpoints, Gaza has come to be known as the world’s largest open-air prison.

In Gaza in Crisis, Noam Chomsky and Ilan Pappé, two of the conflict’s most insightful critical commentators, survey the fallout from Israel’s conduct in Gaza and place it into the context of Israel’s longstanding occupation of Palestine. This second edition includes new material covering the latest developments in Gaza, including Chomsky’s account of his 2012 visit to Gaza.

“Chomsky is a global phenomenon … he may be the most widely read American voice on foreign policy on the planet.”

“Ilan Pappé is Israel’s bravest, most principled, most incisive historian.”

“This sober and unflinching analysis should be read and reckoned with by anyone concerned with practicable change in the long-suffering region.”

Ilan Pappé is Professor of History at the University of Exeter and the author of The Ethnic Cleansing of Palestine.

Frank Barat is a peace activist living in Brussels. He is a coordinator for the Russell Tribunal on Palestine, a member of the Palestine Solidarity Campaign, and the Israeli Committee Against House Demolitions.

OTHER TITLES BY NOAM CHOMSKY: