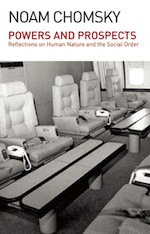 POWERS AND PROSPECTS
Reflections on Nature and the Social Order

In this intellectual tour de force, Noam Chomsky brings together his thinking on topics ranging from language and human nature, to the Middle East settlement, and the place of East Timor in the New World Order. Powers and Prospects is a collection of some of Chomsky’s most important essays on questions of linguistics, philosophy, ethics, and international affairs. Supported by a wealth of disturbing details and facts, Chomsky provides a scathing critique of government policy and media complicity, while offering an inspirational view of the potential for true democracy worldwide.

‘Powers and Prospects – Reflections on Human Nature and the Social Order adds another controversial volume to Chomsky’s already tottering pile on language and politics…This political chapters, by contrast, boil with barely restrained moral outrage and passion…A powerful section covers the British and Us role is organizing and supporting Suharto’s murderous military coup of 1965, which resulted in the slaughter of some 600 000 people…Chomsky presents here a timely review of the western-backed massacres in East Timor…Chomsky, as ever, remains one of the few people willing to put the true value of all three in their proper perspective’