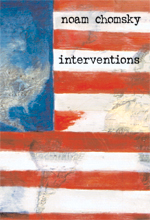 For over a decade, Noam Chomsky wrote column for the New York Times Syndicate in which he cogently and critically examined the leading issues of the day.  This powerful collection of Chomsky’s razor-sharp analyses covers the invasion and occupation of Iraq, the Bush presidency, the Israeli invasion of Lebanon, and other burning issues of our day. A timely, accessible, clear contribution from the world’s leading political intellectual and dissident.

Tariq Ali is a writer and filmmaker. He has written more than a dozen books on world history and politics—including Pirates of the Caribbean, Bush in Babylon,The Clash of Fundamentalisms and The Obama Syndrome—as well as five novels in his Islam Quintet series and scripts for the stage and screen. He is an editor of the New Left Review and lives in London.