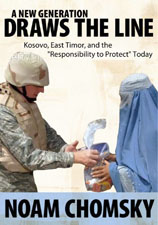 US intervention is never what it seems – Chomsky shows us why