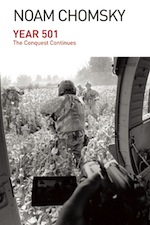 Year 501 definitively shows how the United States developed into the world’s most implacable and powerful empire. Analyzing Haiti, Latin America, Cuba, Indonesia, and even pockets of the Third World developing in the United States, Chomsky draws parallels between the genocide of colonial times and the murder and exploitation associated with modern-day imperialism.

“Year 501 is another awesome achievement by Noam Chomsky. It is a devastating array of information about the U.S. role in the world, placed in the long historical perspective of the 500 years that followed the voyages of Columbus. The result is a wonderful single-volume education in history and world politics.”

“This book portrays the world born five centuries ago: An immense supermarket where value is determined by price tags. What is the price of an intellectual? Chomsky’s fierce talent proves once more that human beings are not condemned to become commodities.”