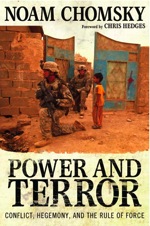 POWER AND TERROR
Conflict, Hegemony, and the Rule of Force

This updated and significantly revised edition explores the dynamics of power relationships and international negotiations and the use of terror between the United States and Western countries and the nations of the Middle East in the post-9/11 era. Chomsky looks back to patterns since World War II to show how acts of terrorism today cannot be understood outside the context of Western power and state terror throughout the world, especially in the Middle East. This new edition offers the best opportunity to follow Chomsky’s analysis in its development during the ten years since 9/11.