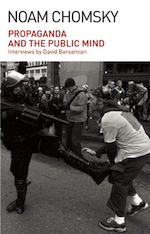 PROPAGANDA AND THE PUBLIC MIND

Renowned interviewer David Barsamian showcases his unique access to Chomsky’s thinking on a number of topics of contemporary and historical import. Chomsky offers insights into the institutions that shape the public mind in the service of power and profit. In an interview conducted after the important November 1999 “Battle in Seattle,” Chomsky discusses prospects for building a movement to challenge corporate domination of the media, the environment, and even our private lives. Whether discussing US military escalation in Colombia, attacks on Social Security, or growing inequality worldwide, Chomsky shows how ordinary people, if they work together, have the power to make meaningful change.

In Propaganda and the Public Mind, we have unique insight into Noam Chomsky’s decades of penetrating analyses . . . drawn together in one slender volume by a brilliant radio interviewer, David Barsamian.”

“To anyone who wonders if ideas, information, and activism can make a profound difference in the twenty-first century, I say: ‘Read this book.’ Propaganda and the Public Mind challenges us to think more independently and more deeply about the human consequences of power and privilege.”