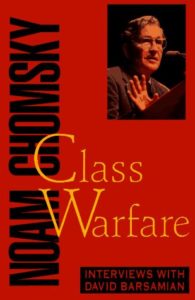 Western societies are divided more clearly than ever before into the haves and the have-nots, the needy and the greedy. In addition, neoliberal doctrines have been reshaped into more effective instruments of oppression and domination. Through a fascinating dialogue with long-time collaborator and fellow activist David Barsamian, Noam Chomsky explores this growing economic and social crisis, arguing that it is now acceptable political discourse to discuss class warfare. Chomsky focuses his customarily critical eye on a range of themes and issues – from Israel to East Timor, from the US federal reserve to women’s rights, from transport subsidies to the dangers of devolution – and touches on some of his more personal concerns, such as his teaching, his critics and local labour disputes. Class Warfare is challenging, thought-provoking, illuminating and profound, and a powerful road-map to the emerging global capitalism.