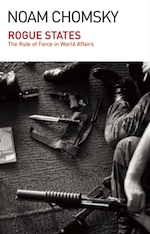 ROGUE STATES
The Rule of Force in World Affairs

In this still-timely classic, Noam Chomsky argues that the real “rogue” states are the United States and its allies. Chomsky turns his penetrating gaze toward U.S. involvement in the Middle East, Southeast Asia, the Caribbean, and Latin America to trace the enduring combined effects of military domination and economic imperialism on these regions.

“World-famous MIT linguist [Noam Chomsky] has long kept up a second career as a cogent voice of the hard left, excoriating American imperialism, critiquing blinkered journalists and attacking global economic injustice…. [In Rogue States] Chomsky has delivered another impressive argument that the U.S. flouts international law when it finds it convenient to do so.”

“Noam Chomsky is like a medic attempting to cure a national epidemic of selective amnesia…. [Rogue States is] a timely guide to the tactics that the powerful employ to keep power concentrated and people compliant…. Chomsky’s work is crucial at a time when our empire perpetually disguises its pursuit of power under the banners of ‘aid,’ ‘humanitarian intervention,’ and ‘globalization.’ Americans have to begin deciphering the rhetoric. Chomsky’s a good place to start.”