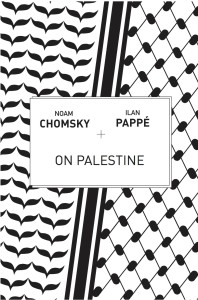 Operation Protective Edge, Israel’s most recent assault on Gaza, left thousands of Palestinians dead and cleared the way for another Israeli land grab. The need to stand in solidarity with Palestinians has never been greater. Ilan Pappé and Noam Chomsky, two leading voices in the struggle to liberate Palestine, discuss the road ahead for Palestinians and how the international community can pressure Israel to end its human rights abuses against the people of Palestine in this book edited by Frank Barat. On Palestine is the sequel to their acclaimed book Gaza in Crisis (Haymarket Books).

Ilan Pappé is Professor of History at the University of Exeter and the author of The Ethnic Cleansing of Palestine.

Frank Barat is a peace activist living in Brussels. He is a coordinator for the Russell Tribunal on Palestine, a member of the Palestine Solidarity Campaign, and the Israeli Committee Against House Demolitions.

OTHER TITLES BY NOAM CHOMSKY: