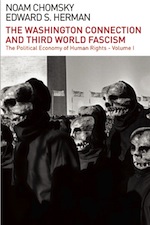 THE WASHINGTON CONNECTION AND THIRD WORLD FASCISM
The Political Economy of Human Rights: Volume I

A brilliant, shattering, and convincing account of United States-backed suppression of political and human rights in Latin America, Asia, and Africa and the role of the media in misreporting these policies

The Washington Connection and Third World Fascism relentlessly dissects the official views of establishment scholars and their journals. The “best and brightest” pundits of the status quo emerge from this book thoroughly denuded of their credibility.

“The publication of Herman and Chomsky’s The Political Economy of Human Rights in 1979 stands out as a landmark in U.S. publishing, and in the analysis of U.S. imperialism.”

“A major contribution to understanding political repression inflicted by the CIA and its related services on millions around the globe and the economic requirements behind such repression . . . A must-read for all those who would resist.”

Edward S. Herman (1925-2017) was an American economist and media analyst with a specialty in corporate and regulatory issues as well as political economy and the media. Herman was Professor Emeritus of Finance at the Wharton School of the University of Pennsylvania.