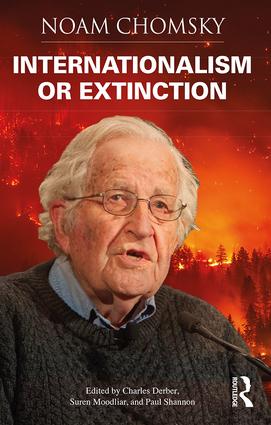 In his new book, Noam Chomsky writes cogently about the threats to planetary survival that are of growing alarm today. The prospect of human extinction emerged after World War II, the dawn of a new era scientists now term the Anthropocene.

Chomsky uniquely traces the duality of existential threats from nuclear weapons and from climate change—including how the concerns emerged and evolved, and how the threats can interact with one another. The introduction and accompanying interviews place these dual threats in a framework of unprecedented corporate global power which has overtaken nation states’ ability to control the future and preserve the planet. Chomsky argues for the urgency of international climate and arms agreements, showing how global popular movements are mobilizing to force governments to meet this unprecedented challenge to civilization’s survival.

“No one but Noam Chomsky so passionately links the twin, man-made threats to organized human existence—cataclysmic climate change and nuclear doomsday machines—and no previous communications of his warnings and challenge to action, has presented them so impressively.”