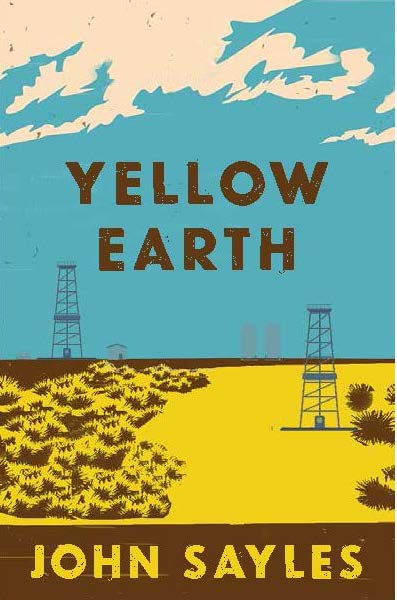 The population of the area triples overnight, with most of the newcomers young men without women.  County Sheriff Will Crowder and the chief of reservation police, Danny Two Strike, are overwhelmed, while the chairman of the Three Nations council, Harleigh Killdeer, has visions of ‘sovereignty by the barrel’.  Local residents have to deal with the invading oil-drillers and their opportunistic camp followers and the land itself is transformed.

With characteristic lyrical dexterity, insight, and wit, John Sayles introduces us to a memorable cast of characters, weaving together narratives of competing agendas and world views through masterful storytelling.

Set shortly before Standing Rock would become a symbol of historic proportions of the brutal confrontation between native resistance and the forces of big oil and law enforcement, the fate of Yellow Earth serves as a parable for our times.

“Few fiction writers understand the ripple effect that big industry can have on a community with as much depth and empathy as John Sayles….His latest novel, Yellow Earth, might be his most deeply felt work yet.”

“Densely textured, overtly political fifth novel [in which] the acclaimed director and screenwriter recounts what happens when shale oil is discovered beneath an Indian reservation in the North Dakota badlands and crowds of outsiders descend.”

“Mr. Sayles writes with such verve and colloquial humor that even the most esoteric issues brighten with fascination….Mr. Sayles superbly dramatizes the man-made disruptions in his novel’s small pond, but in a book motored by anarchy the most unsettling section occurs when the boom goes bust, bringing “Yellow Earth” to a surprisingly quiet conclusion: the depiction of a modern-day ghost town.”

“Without falling prey to false “both sides” equivocation, Sayles masterfully balances and gives fair hearings to competing agendas and doesn’t shy away from the ugly side of human nature; by the same token, he doesn’t give in to cynicism or despair. What animates his fiction is curiosity about different kinds of people and their experiences, and an imagination expansive enough to portray their inner lives. He doesn’t fetishize diversity, but his stories are naturally diverse as a result of his engaged interest in the world around him. Now entering the fifth decade of his career, Sayles remains a standard-bearer for the American novel.”

“Filmmaker Sayles…is also a highly imaginative short story writer with a sure ear for dialogue, a keen eye for group dynamics, a flair for quickly establishing intriguing mise-en-scènes, and the ability to animate a great spectrum of flinty characters…Sayles expresses his compassion and concern for those who struggle with poverty and prejudice, seeking both to provoke and entertain.”

“Sayles’s scrawl achieves a sensational pace. It is the impressive result of a comprehensive portrayal of all four stages and an incredible amount of layering, symbolism, and ideology. There is an urgency to Yellow Earth, and Sayles wastes no words….The magic of Yellow Earth is that it doesn’t feel didactic or like an overdone parable. Rather, Sayles fills his work with contradictions. The competing perspectives and ideologies manifest through the characters’ colloquial conversations, inner dialogue, and motivations.”

“John Sayles has created a tale of people and place bewitched and bedeviled by money and power, ultimately convinced to join in the destruction of their lands and their lives. Not only is his story believable, it could easily be a work of non-fiction, so accurately does he portray the possibilities of an energy extraction project on the lives of men and women in the US heartland.”

“Many writers can render credible characters in a credible world, but only a few can do so with a warmth and a humor that is as wise as it is true.”

“[Sayles’s] ancestry is more like the reportorial vigor Jack London on one side and a little of the sweet impressionism of Stephen Crane on the other.”

“John Sayles is one of the most important public historians of our generation.”

“John Sayles is the very paradigm of the contemporary independent filmmaker. By raising much of the funding for his films himself, Sayles functions more independently than most directors, and he has used his freedom to write and produce films with a distinctive personal style and often clearly expressed political positions. From The Return of the Secaucus Seven to Sunshine State, his films have consistently expressed progressive political positions on issues including race, gender, sexuality, class, and disability.”

“Sayles is a terrific writer. His breathtaking precision and attention to detail can make E.L. Doctorow’s historical novels look puny and slapdash by comparison. His ability to map the intersections of scores of plots and hundreds of fictional and real- life characters is truly stunning.”

John Sayles works as a fiction writer, screenwriter, actor and feature film director. His novel Union Dues (1978) was nominated for the National Book Award and the National Critics’ Circle Award. He has written over a hundred screenplays and was twice nominated for the Academy Award for Best Original Screenplay. He has directed 18 feature films, with another, I Passed This Way, currently in progress. His films Matewan and Lone Star, as well as his previous novel A Moment in the Sun, are often used for instruction in History and American Studies courses. Yellow Earth is his fifth novel.