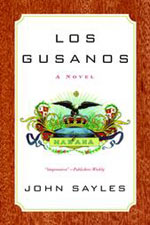 With a new introduction by Howard Zinn

Set in Miami in 1981, Los Gusanos is the vivid and moving account of one extended family’s life in Cuban and the United States. With pathos and understanding, Sayles introduces us to a memorable range of characters — young, old, black, and white — all of whom are struggling to make a new life in their adopted country while haunted by the memories of Cuba. Taking as its title the derogatory term Castro used to describe those who fled to Miami after he came to power, Los Gusanos is beautifully rendered study of who will be the casualty and who the survivor in a time of political upheaval.

“In the early 1980s, Marta de la Pena, a beautiful, otherworldly Cuban exile living in Miami, dreams of avenging the death of her brother Ambrosio, who was killed in the ill-fated Bay of Pigs invasion 20 years earlier. Spurned by the mainstream anti-Castro groups in town, Marta sets out to assemble her own guerrilla strike force from Miami’s large population of gun-toting idealists, madmen, and soldiers of fortune. Sayles … brings a cinematic eye to historical fiction. Focusing on the vicissitudes of Marta’s extended family in both Havana and Miami, he reviews 50 years of Cuban-American relations. An exciting, instructive, and highly readable novel.”