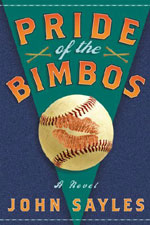 PRIDE OF THE BIMBOS

Pride of the Bimbos, with its outrageous plot and cast of outlandish characters, is both funny and profound. It is about a man who refuses to admit he’s a freak: Pogo Burns, midget and former private eye. Pogo plays for the Brooklyn Bimbos, a cross-dressing circus sideshow softball team, and is pursued by an evil superpimp named Dred, whom he once shot in order to rescue the woman he loved.

The tale of Pogo’s rise, fall and eventual immortality is narrated with wit and depth. This remarkable book marked the start of legendary filmmaker John Sayles’s career as a novelist.