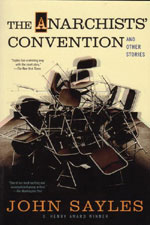 THE ANARCHISTS’ CONVENTION AND OTHER STORIES

Before John Sayles was an Oscar-nominated screenwriter, he was a National Book Award-nominated writer of fiction. The Anarchists’ Convention is Sayles’s first, celebrated short story collection, and includes the widely anthologized, O. Henry award-winning “I-80 Nebraska.” Infused with humor and compassion, diverse in scene and character, each narrative captures the idioms and matter-of-fact strength of the homeless, restless, and eternally hopeful.

These American originals range from a kid on the road headed westward; a lonely woman temping in Boston; anthropologists in the field; bums on the beach; and speed-addled truckers gabbing over the CB radio — and of course the anarchists of the title, ancient septuagenarian political die-hards who find strength for a noble last stand.

“Many writers can render credible characters in a credible world, but only a few can do so with a warmth and a humor that is as wise as it is true.”

“[Sayles’s] ancestry is more like the reportorial vigor Jack London on one side and a little of the sweet impressionism of Stephen Crane on the other.”