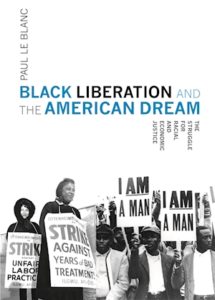 BLACK LIBERATION AND THE AMERICAN DREAM

The Struggle for Racial and Economic Justice

This engaging and rich collection of essays and readings concentrates on the connections between racial justice and economic justice, but also explores the dynamic intersections of race, class, and gender oppression.

“A timely weapon in the fight against racism.”

Chris Clement, Against the Current

Praise for Lenin and the Revolutionary Party:

“A work of unusual strength and coherence, inspired not by academic neutrality but by the deep conviction that there is much to learn from the actual ideas and experiences of Lenin and the revolutionary party he led.”
—Michael Löwy

“We desperately need the resurrection and revival of the kind of strategic thinking and principled commitment that Lenin epitomized in the era of 1917, and all that it promised. For those interested in this rebirth of the politics of alternative to capitalism, Paul Le Blanc’s account of the democratic, socialist, and revolutionary Lenin will prove indispensable. Reading it is a reminder that what is, need not be, and that what has, seemingly, failed, can be reconstituted anew.”
—Bryan Palmer

Praise for Marx, Lenin and the Revolutionary Experience:

“Looking back at the tumultuous events associated with revolutionary Marxism in the past century, Paul Le Blanc offers us an insightful, sympathetic, and even-handed assessment of the sources of its dynamism as well as the causes of its decline.”
—Walden Bello