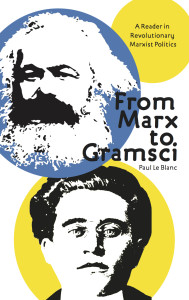 From Marx to Gramsci offers a readable introduction to the historical contexts, lives, and revolutionary ideas of six central thinkers in the Marxist tradition—Karl Marx, Frederick Engels, Rosa Luxemburg, V. I. Lenin, Leon Trotsky, and Antonio Gramsci. A clear and well-documented introduction demonstrates how their varied contributions represent a revolutionary Marxist synthesis, providing an understanding of capitalist development, a theory of the labor movement, a strategy for revolution, and a conception of the transition to socialism. The bulk of the volume provides a representative sampling of Marxist writings offering insights into the dynamics of history, politics, society, and economics, with an emphasis on struggles for social change. From Marx to Gramsci concludes with a searching discussion, drawing from various critics of Marxism and realities of the late twentieth century, of whether revolutionary Marxism actually has a future.

“This is an extremely valuable volume. It gathers in one place material from various sources and makes it accessible to the serious student. The scholarly apparatus—bibliography, short biographies, and introductory essays—makes it especially useful both for the general reader and for teachers in the field. It should make a useful contribution in our struggle for human freedom.”

“The power of this book lies in Le Blanc’s excellent selection and presentation of some of the most fundamental ideas of Marx, Engels, Lenin, Luxemburg, Trotsky, and Gramsci. His choice of references and the framework for his selection rest on the premise that the central pivot of Marxism is ‘proletarian revolutionary practice.’”

“The best available tool for revitalizing the consideration of socialist practice in our study groups and classrooms.”

“A most welcome and needed introduction to Marxist politics from a revolutionary viewpoint . . . for students
and activists.”