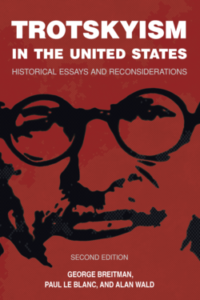 TROTSKYISM IN THE UNITED STATES

In the new edition of this definitive work on the history of the revolutionary socialist current in the United States that came to be identified as “American Trotskyism,” Paul Le Blanc offers fresh reflections on this history for scholars and activists in the twenty-first century. Includes a preface written especially for the new edition of this distinctive work.

Praise for Marx, Lenin and the Revolutionary Experience (Paul LeBlanc):

“Looking back at the tumultuous events associated with revolutionary Marxism in the past century, Paul Le Blanc offers us an insightful, sympathetic, and even-handed assessment of the sources of its dynamism as well as the causes of its decline.”

Praise for Exiles from a Future Time (Alan Wald):

“A solid contribution to American studies, this will be welcomed by literary scholars, historians, and political scientists for its thorough research and wide ranging scholarship.”

Alan M. Wald is the H. Chandler Davis Collegiate Professor of English Literature and American Culture at the University of Michigan and is the recipient of the Mary C. Turpie Prize of the American Studies Association. Among Alan Wald’s widely acclaimed writings is The New York Intellectuals (1987).

George Breitman (1916-86) was an American communist political activist and newspaper editor. He is best remembered as a founding member of the Socialist Workers Party and as a long-time editor of that organization’s weekly paper, The Militant. He also edited internationally influential volumes of works by Malcolm X and Leon Trotsky.