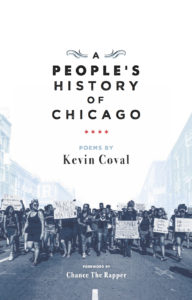 A PEOPLE’S HISTORY OF CHICAGO

Known variously as the “Windy City,” the “City of Big Shoulders,” or “Chi-Raq,” Chicago is one of the most widely celebrated, routinely demonized, and thoroughly contested cities in the world.

Chicago is the city of Gwendolyn Brooks and Chief Keef, Al Capone and Richard Wright, Lucy Parsons and Nelson Algren, Harold Washington and Studs Terkel. It is the city of Fred Hampton, house music, and the Haymarket Martyrs. Writing in the tradition of Howard Zinn, Kevin Coval’s A People’s History of Chicago celebrates the history of this great American city from the perspective of those on the margins, whose stories often go untold. These seventy-seven poems (for the city’s seventy-seven neighborhoods) honor the everyday lives and enduring resistance of the city’s workers, poor people, and people of color, whose cultural and political revolutions continue to shape the social landscape.

“Chicago-based poet and educator Kevin Coval has one of the strongest and most long-standing literary visions in the city. Big and inviting, direct and accessible, A People’s History of Chicago is a passionate and illuminating collection. Reading Coval’s words evokes the experience of being guided through the city by someone who loves it for what it is and pushes it toward the potential of what it could become.”

“A fascinating book. Beautiful poems that really teach you a lot about Chicago.”

“Coval’s poems not only bridge the past and the present; they create a community through history, returning the city to those who built and continue to build it.”

“Invoking past Chicago writers and artists like Studs Terkel, Gwendolyn Brooks, and Common, Coval joins those who so engrossed themselves in their city that they found a mirror reflection of the beauty and horror of the entire country within its confines.”

“As the city of Chicago blows out its birthday candles this weekend, Kevin Coval is clearing the smoke with the real and sometimes forgotten stories of the city’s working-class heroes.”

“In history, there is the official narrative; and there is the parallel, underreported version of events. There’s the Great Man interpretation of our collective past; and there’s the view from the grassroots.  Kevin Coval’s A People’s History of Chicago is an alternate chronology of the city he calls home. The book is animated by a twin desire to celebrate the contributions of working people and the endless cultural stamina of Chicago’s minority communities.”

“Kevin Coval has given us a gift, a collection of heartfelt, piercing poems, stories really, about America’s city.”

Alex Kotlowitz, author of There Are No Children Here

“This vibrant, dynamic collection of vignettes exposes the naked truth of our fair city.”

“The spine of this book of the People’s History of Chicago is the people’s resistance and struggle for justice and a fair shake. Coval is in the Chicago Tradition – fire, earth, and endless blues.”

Angela Jackson, author of Where I Must Go, winner of the American Book Award

“Coval’s poems vividly color in the lines of history, adding humanity to the people who shaped Chicago’s story.”

Kevin Coval is the author of Schtick, L-vis Lives, and Everyday People the American Library Association “Book of the Year” Finalist Slingshots: A Hip-Hop Poetica. Kevin is also the co-author of This is Modern Art, and an editor of The BreakBeat Poets. He is the founder of Louder Than a Bomb: The Chicago Youth Poetry Festival, Artistic Director at Young Chicago Authors, and teaches at the University of Illinois at Chicago.

This Is Modern Art: A Play(with Idris Goodwin)