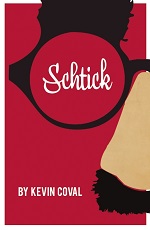 From the poet hailed as a “new growing voice in the world of literature” by the legendary Studs Terkel, comes Shtick. Schtick is the tale of Jewish assimilation and its discontents; a sweeping exposition on Jewish-American culture in all its bawdy, contradictory, and inventive glory. Exploring how Jews shed minority status in America – in his own family and in culture and politics at large – poet Kevin Coval shows us a people’s transformation out of diaspora, landing on both sides of the color line.

i will tell my jewish kids
we have a long story. More than what is seen
now

“Coval does for the Jews what Whitman did for America.”

“Coval leans all the way in with Schtick, exposing the grimy, slippery truths about how we live and love and hate with his characteristic wit, rhythmic cadence and unflinching honesty. Powerful.”

“As a poet once observed, ‘Poetry is the music of facts.’ Kevin Coval’s poetry rings with that music. From the grit and turmoil of everyday life, Coval constructs a new beauty that inspires and transforms.”

“One of my favorite poets.”

“Kevin Coval is a new, glowing voice in the world of literature.”

“I dig this book, for many reasons, mainly because it makes me think. Any literature that causes us to use our brains and contemplate our roles within the human condition is a good thing! I love … how it mixes Humpty-Hump in with the likes of American iconism. Also I’m part Jewish (it’s a slice of my mutt-ism).”

“A concious Jewish phenomenon … [Coval’s] work speaks to the Jewish relationship to the American color line.”

“Coval’s greatest strength is his rhythmic, beautiful prose and his willingness to speak truth to power, no matter what the personal cost.”

“Historical/hysterical… reverent/blasphemous… this book bursts with pride/shame/joy/pain. Coval bravely edits nothing. His dazzling images/ideas fly at you, as if scattershot from some Yiddish theater/circus cannon.”

“Kevin’s poems are hugely influenced by the fact I performed at his bar mitzvah. Yes, I said the word doody. And yes, now he’s brilliant.”

Jeff Garlin, co-star and Executive Producer of the HBO series Curb Your Enthusiasm

“‘Schtick’ implies routine, but Coval’s book is anything but. Instead it’s an outpouring of self-assessment, cloaked in a tallith of vivid, streetwise language.”

Kevin Coval is the author of ALA “Book of the Year” finalist Slingshots: A Hip-Hop Poetica, Everyday People, and most recently, L-vis Lives! Racemusic Poems. Founder of Louder Than a Bomb: The Chicago Teen Poetry Festival, Coval is the Artistic Director of Young Chicago Authors. He is a regular contributor to WBEZ Chicago Public Radio and teaches creative-writing at schools across the city.

This Is Modern Art: A Play(with Idris Goodwin)