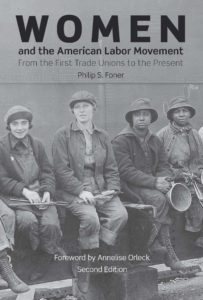 WOMEN AND THE AMERICAN LABOR MOVEMENT

An inspiring comprehensive historical narrative featuring women who led struggles for freedom, equality, and unity on the labor front, from the first colonial trade unions to the fight for a voice in the twentieth-century labor movements.

“With women today making up more than half the work force, the labor movement is changing. And understanding these changes and possibilities, Foner’s exhaustive, carefully documented, and readable history is timely and invaluable.”

“Foner’s survey of twentieth-century developments is lively, readable, delightfully anecdotal, and unabashedly partisan…His spirited heroines are a joy; they more than recommend the book.”

“An indispensable reference work for anyone interested in the history of the women’s movement in the United States.”

“Women and the American Labor Movement provides a valuable sourcebook as well as an intriguing stimulus to scholars who will want to expand the field.”

Philip Foner (1910-1994) was a prolific people’s historian whose many works include Organized Labor and the Black Worker, 16-19-1981, The Black Panthers Speak, Clara Zetkin; Selected Writings, and The Letters of Joe Hill, all published in new editions by Haymarket Books.

Annelise Orleck is Professor of History at Dartmouth College. She is the author of four books on the history of U.S. women, politics, immigration and activism. Most recent among them are Storming Caesars Palace: How Black Mothers Fought Their Own War on Poverty (2005) and Rethinking American Women’s Activism (2014). She is also co-editor of The War on Poverty, 1964–1980: A New Grassroots History (2011) and The Politics of Motherhood; Activist Voices from Left to Right (1997).