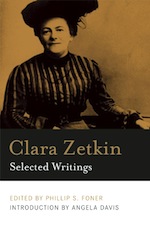 Essays and speeches from 1889-1933, long unavailable in the U.S., on women’s equality, labor, peace, socialism. In her writings, Zetkin describes the political process that ultimately allowed for “socialized reproduction” — namely the establishment by the Soviet Revolutionary government of communal kitchens, laundries and child care facilities.

Clara Zetkin was a German Marxist theorist, activist, and advocate for women’s rights. In 1911, she organized the first International Women’s Day.

Philip S. Foner was one of the most prominent Marxist historians in the United States. A prolific author and editor, he tirelessly documented the lives of workers, African Americans, and political radicals. Shut out of academic employment for a quarter century because of his political affiliations, he nonetheless helped lay the basis for the explosion of scholarship in labor and black history during the past two decades.

Angela Davis is an American political activist, scholar, and author. Davis was politically active during the late 1960s through the 1970s and was associated with the Communist Party USA, the Civil Rights Movement and the Black Panther Party. Davis was a political prisoner and is now a world-renowned scholar and author of Are Prisons Necessary?

Baxandall was one of the foremothers of the women’s liberation movement in the late l960s, helped found several day care centers and was on the Mayor’s Task Force on Day Care. She was active in Red Stockings, WITCH (Women’s International Terrorist Conspiracy from Hell), No More Nice Girls, CARASA (Coalition for Abortion and Against Sterilization Abuse), and History in Action.