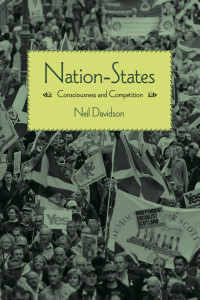 In his latest collection of essays, Neil Davidson brings his formidable analytical powers to bear on the concept of the capitalist nation-state. Through probing inquiry, Davidson draws out how nationalist ideology and consciousness is used to bind the subordinate classes to “the nation,” while simultaneously using “the state” as a means of conducting geopolitical competition for capital.

Neil Davidson is the author of The Origins of Scottish Nationhood (2000), Discovering the Scottish Revolution (2003), for which he was awarded the Deutscher Prize, and How Revolutionary Were the Bourgeois Revolutions? (2012). Davidson lectures in Sociology in the School of Political and Social Science at the University of Glasgow, Scotland.